From Mordhau Wiki
Jump to: navigation, search
This article is a stub. You can help Mordhau Wiki by expanding it.

An overview of the fundamentals of combat in Mordhau

You can get an overview of the default keybinds on the Controls article.

Your health bar (red) has 100 hit points. All players have the same amount of health, but some loadouts have heavier armor than others, which reduces damage taken. Running out of health will kill you.

When you kill an enemy, you gain 25 health back. Having the Bloodlust perk gives you full health on kill.

Your stamina bar (yellow) has 100 points. All players have the same amount of stamina, but some weapons cost more stamina to use than others. Running out of stamina will disarm you when you attempt to parry or chamber.

When an enemy becomes low on stamina, they will start grunting, giving you an audible cue that they are close to being disarmed.

Stamina & Health will regenerate if you walk, crouch or stand still after 5 seconds (Stamina will start healing sooner). Running, damage, or any actions that require the use of stamina will stop the regen. Jumping will prevent regeneration from starting, but will not stop it if it has already started.

Insert Gif of the Health and Stamina bar regenning..

There are various forms of movement and related mechanics in Mordhau.

Costs 10 stamina, which can be reduced by 50% using the Acrobat perk. Jumping at a climbable wall will pull your character over the wall. Jumping is useful in combat for dodging swings aimed at your feet (ex. footdrags, underhand accels)

Crouching will make you move slightly slower than walking speed. This speed can be increases using the Rat perk. Crouching can be used for Matrixing techniques.

Lunge is a very short forward dash (a lunge) that occurs when your attack enters release while you are moving forwards. Lunge also triggers on combo attacks.

This mechanic gives you a much faster running speed when chasing an enemy as long as you're staring directly at them. It is impossible to outrun a player who is using this mechanic.

Footwork is a series of movements that are designed to give you the upper hand when dueling against an opponent.

There are quite a few different types of ranged attacks in Mordhau, all of them unique in speed, amount, damage, and so on. The Longbow, Crossbow, Recurve Bow, Rocks, Throwing Knives, and Throwing Axes are all ranged weapons that can only be used at some sort of range. Some melee weapons, however, may be used in an alt mode to create a ranged attack, such as the Arming Sword or the Carving Knife, by throwing them at your opponent.

Kicks are extremely fast short range attacks, best used as defensive interrupts. Pressing F will start a kick, costing 10 stam on a miss, gaining 10 stam on a hit, and reducing your opponent's stamina by 10.

Kicks are best used defensively vs opponents that aggressively maintain facehug. Kick them during their attack windup, and you will sway the fight in your favor.

You can also kick midair, performing a jump kick. Simply Jump forward, then Kick. Your character will continue travelling forward, sending a slower and unfeintable kick. Jump kicks are far less useful than normal kicks, since you cannot feint them, but they can still be relevant in the right scenarios.

Morphs are performed by inputting a stab during strike windup, or inputting a strike during stab windup. This "morphs" your attack into a different attack, useful for baiting out parries or chambers, at the cost of 7 stamina. You can morph out of a chamber, and you can morph to a kick. Generally, you want to morph as late as possible. The morph window is smaller than the feint window, so morphs are easier to read.

Morph Feinting is when you feint your morph (ex. stab, morph to overhead, feint the overhead). This is most often used as a counter to a technique called "Chamber FTP". This mixup is very hard to read, but costs the stamina cost of both morphs and feints.

Feints are performed by pressing Q during windup. This pulls your weapon back to a neutral state, and is useful for baiting out parries, at the cost of 10 stamina. You can feint during any windup, meaning swings, stabs, Morphs, chambers, and Kicks can all be feinted. Generally, you want to feint as late as possible. The Feint Window is open until the last 50ms of windup.

Swing Manipulation is a key element to fighting in Mordhau, the two most common ways of manipulating your weapons are drags or accels. Dragging your weapon causes it to move slower, causing your enemy to parry too early and then be hit. Accels are attacks that are faster than your opponents ability to parry, causing them to parry too late and be hit. For more advanced information on Swing Manipulation, just follow the link!

Parrying blocks all incoming attacks in front of you. Right clicking instantly raises your parry for a third of a second. 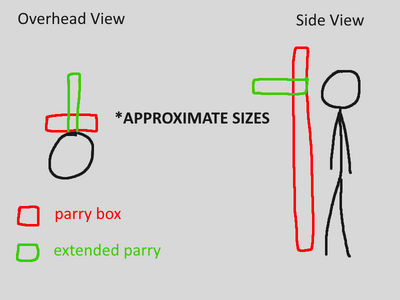 Linear vs Curved, Hyper-Armor, Crosshair icon before and after. Late Ripostes

Initiative is the concept of alternating offense and defense. While Mordhau is a real time game, combat flows back and forth, as each player "takes turns" attacking and defending. This happens because after an opponent parries or chambers you, there is a short period where you cannot input an attack, but they can; meaning, if they attack ASAP after blocking, and you attack ASAP after getting blocked, they will hit you first 100% of the time unless something happens to delay their attack (ex. feinting). This creates "turns", the concept of initiative. Initiative is not an absolute rule, rather a framework for looking at combat.

Initiative can be stolen. If your opponent swings, you Chamber, and they feint, they are now forced to parry or eat your hit. This is one example of stealing initiative. Another is kicking a player in windup.

As a rule of thumb, if you Parry, Chamber, or land a Kick, you have initiative. Initiative is a blurry concept when more than two players are involved, so stealing initiative becomes crucial.

When fighting with an opponent who has the initiative, gambling is when you strike to steal the initiative from them because you believe you can land a hit first. There are times when gambling can be good or bad. A good time to gamble would be if you notice your opponent is Feinting pretty consistently, you might think that you can land a hit. A bad time to do this would be if your opponent is actively swinging, they'll hit you because their swing was already being committed when you tried to seize the initiative.

Talk about the various Perks and talk about how useful it is to have them.

How to hide, where to place, link to the Bear Trap item.

Talk about the Lute I guess?