Parrying happens when you right click, briefly raising your weapon or shield, to block incoming attacks. Parry lasts 325ms, unless you have a kite shield or round shield, which have 375ms and 425ms parry respectively. Parry activates the instant you right click, and lasts for the parry duration, unless you get flinched out of parry. 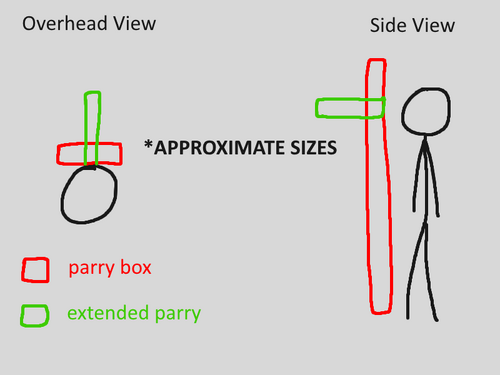 Extended Parry can be thought of as a rectangular prism that begins in your eyes and ends a short distance from your character. It extends past the parry box. Anything that comes into contact with Extended Parry gets parried. This is useful for parrying drags.

When you parry an attack, then parry another attack right after, you gain 20 stamina for each consecutive parry. Each parry resets the window, so you could chain together parries and quickly recover your entire stamina bar.

After hitting a player with a swing, you can instantly parry out.

During riposte, you can parry out.

Panic parrying is a broad term for when someone "panics" and parries early windup or recovery of their opponent.

Early parry is when you parry very early, during the opponent's windup. Double parrying is when you early parry, wait through parry recovery, then parry again, sometimes allowing you to parry twice while they're doing one attack. (Similar effect to ChamberFTP but much more inconsistent)

After inputting a parry, it lasts for its duration unless you get flinched out of parry.

This means that you can block multiple attacks with one parry input if they all hit within that window. This is sometimes referred to as "Easy Parry".

Additionally, if you parry and riposte very early in the parry window, your parry is still active until its duration ends, meaning you can still technically parry another attack while in riposte. This is sometimes referred to as "Active Parry", but is actually a manifestation of Easy Parry, and should not be confused with the "Shield Active Parry" that all shields have.

"Shield Active Parry" occurs when you are using a shield (Buckler, Targe, Heater, Kite, Round) and riposte. During riposte, the shield model behaves like extended parry, meaning any attack that contacts the shield model will be parried.

When you feint, you can instantly parry. You can do this manually (feint button, parry button) or you can just parry during windup. This is called Feint to Parry, or FTP for short. It's essential to know how to FTP for fighting multiple opponents and for ChamberFTP (explained later).

You can feint combos. By extension, you can also feint to parry out of combo. This is extremely useful when you're about to miss and will eat a hit - start a combo, then parry out.

Chamber Feint to Parry (ChamberFTP or chftp for short) is an advanced defensive technique that done correctly lets you successfully defend against every kind of attack except morph feints, but with a heavy stamina cost. When you see your opponent winding up, you throw a chamber, timed to chamber an accel. Right after chambering, if they don't accel, you parry.

- accel, then you chamber

- drag, then you parry

- morph, then you parry (or if you chambered early, you might hit them if they don't ftp)

- feint, then you both parry, or you commit your swing and force them to parry out or get hit

- morph feint, then you get hit

You can see from this that chftp is an extremely effective defense against everything but morph feints, but costs a lot of stamina (feint cost + parry cost). A rule of thumb is to chamberftp at facehug, and chftp anything you don't feel comfortable reading.